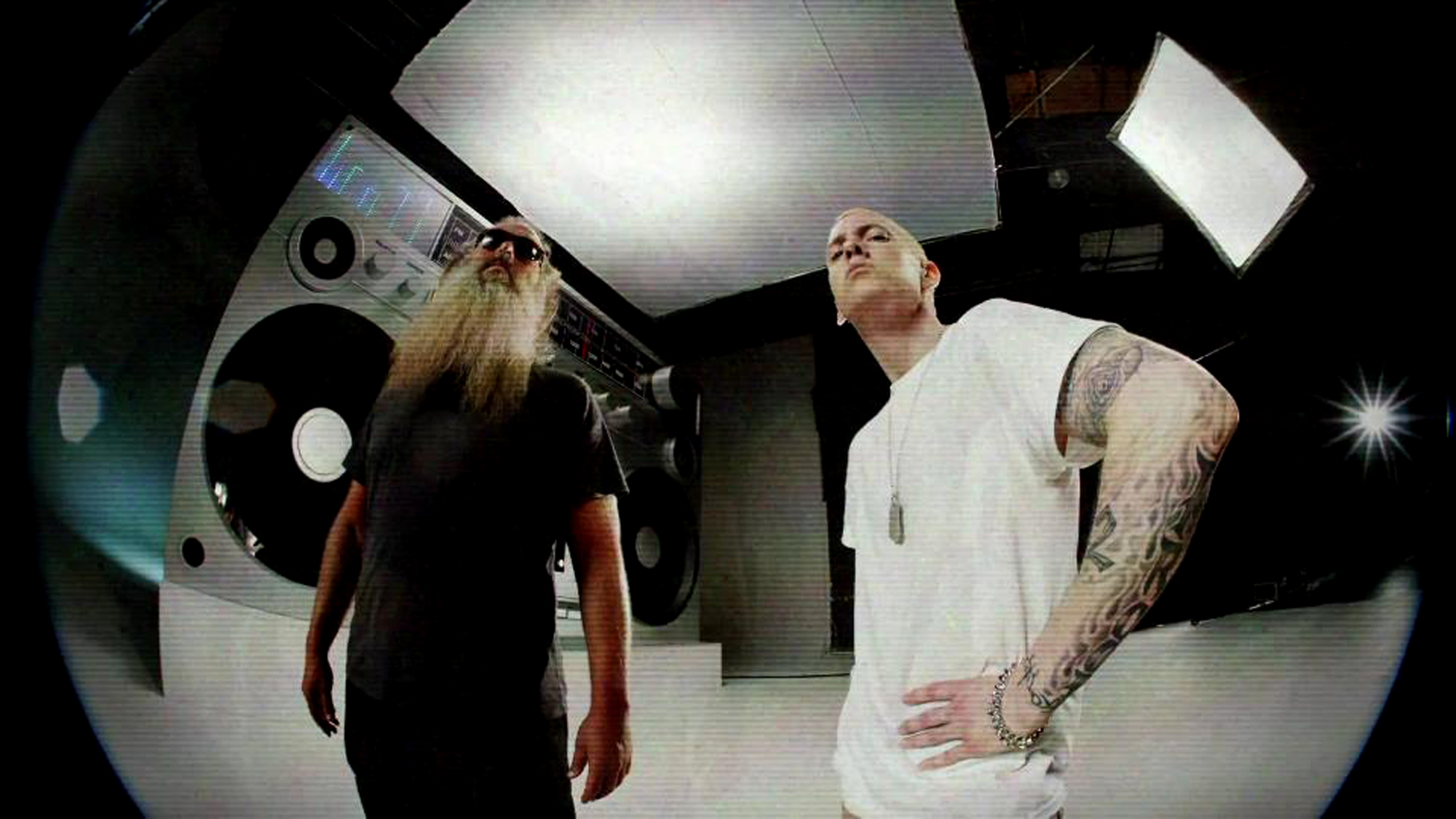 Recognized the best rapper and the last real rock star Marshall Mathers decided to prepare for the new album release of the clip Berzerk, full of respect, love and awe for old school hip-hop.

The clip is a very dramatic video of ridiculous drops and fights from the Internet, fooling around the Eminem, legendary producer Rick Rubin, scenes, stylized classic rap video. Thus, the clip becomes a dedication to the music of the childhood, Eminem and a return to the roots, when hip hop was music, equally skillful, graceful and dangerous.

Let us examine a few figures, to which to send video and song may not clear the people far from hip-hop.

A bearded barefoot man (in the chorus also features a Viking Berserker) — one of the founders of modern hip-hop, the main founder of the label industry, which opened the world such names as Run-Dmc, LL Cool J, the Beastie Boys. It is believed that he first made rappers serious about their art and build a composition in the songs. Concurrently one of the most influential record producers in the world, who managed to record almost all decent, from Red Hot Chilli Peppers to Metalica and Johnny cash. Berzerk track written and produced by them.

The aforementioned team of three white new Yorkers who became legends of rap and were successful in all musical genres, from hard rock to instrumental funk. All of this mixing, the group became the most important team of the 90s, but two years ago, stopped the successful activities due to the death of one of the founders. Psychedelic stains on the sky in the scenes when Eminem walks through the city, I refer to the clip So What Cha Want: camera, wide-angle was part of their signature visual style. They also appear on the twentieth second is depicted on the shirt with their patrons from the old school RUN-DMC. In the song, involved a few vocal samples group.

Young and deservedly fashionable rapper, owning amazing rhythm and style and moreover telling good stories in songs. Last month he raised a lot of noise by writing a verse to the song other Control, which said that the best and indeed the king of new York (though he is from Los Angeles). Some of our colleagues did not understand his athletic bravado, the other part involved in the competition, driving the morass of contemporary mainstream hip-hop. Being a big fan of Eminem, he of course refused, lit up in the clip the master from somewhere in fortieth seconds.

If you notice in the video weird dancing on stage rocker with the band, you should know that this American is Billy SQUIER with his 1981 hit The Stroke on the samples from which built Berzerk.

The star of the old school, strongly influenced by Eminem (at the time, he even admitted that the autobiography of LL Cool J was the only book he read from cover to cover. Although it is known that even read dictionaries for vocabulary). Marshall in the episode plays the moment in the clip LL “Going Back To Cali”.